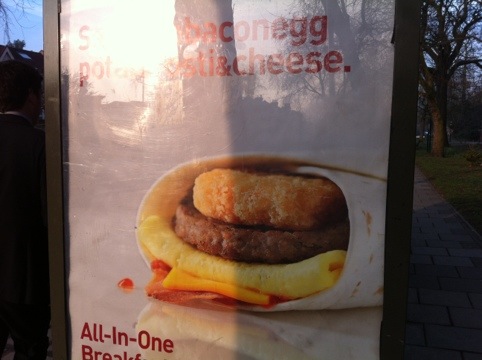 You know you’re in trouble when even photoshop can’t disguise that your sandwich is nothing but grease and gristle.

Mac Donalds seem to have gone down the minimalist advertising route of late. It’s something that catches every brand once in a while with the most notable being tesco. They stick their products on a white background, no fuss, and simply say buy me. What differs between Tesco’s approach and Mac Donald’s is that Tesco is wise enough to leave their products in their boxes. Grease and gristly meat is hard to detect past a picture of a happy family on the front, gleefully shovelling said product into their mouths whilst having an un-naturally good time about the whole thing. With mac Donald’s you get to see a product you already know about, but much bigger and better prepared than you’ve ever had them before. There was a thing like this in the war you know; they had a good name for it too. Propaganda. Are we supposed to be convinced that you’ve turned yourself around, Mac, since the 80’s and started giving a shit about your food? Well I’m not buying it. Not until you grow some god damn balls and use that poster I made for you with a picture of a cow and the words “in a bun” written after it. I’m telling you that shit will sell! Well whatever man, see if I care.