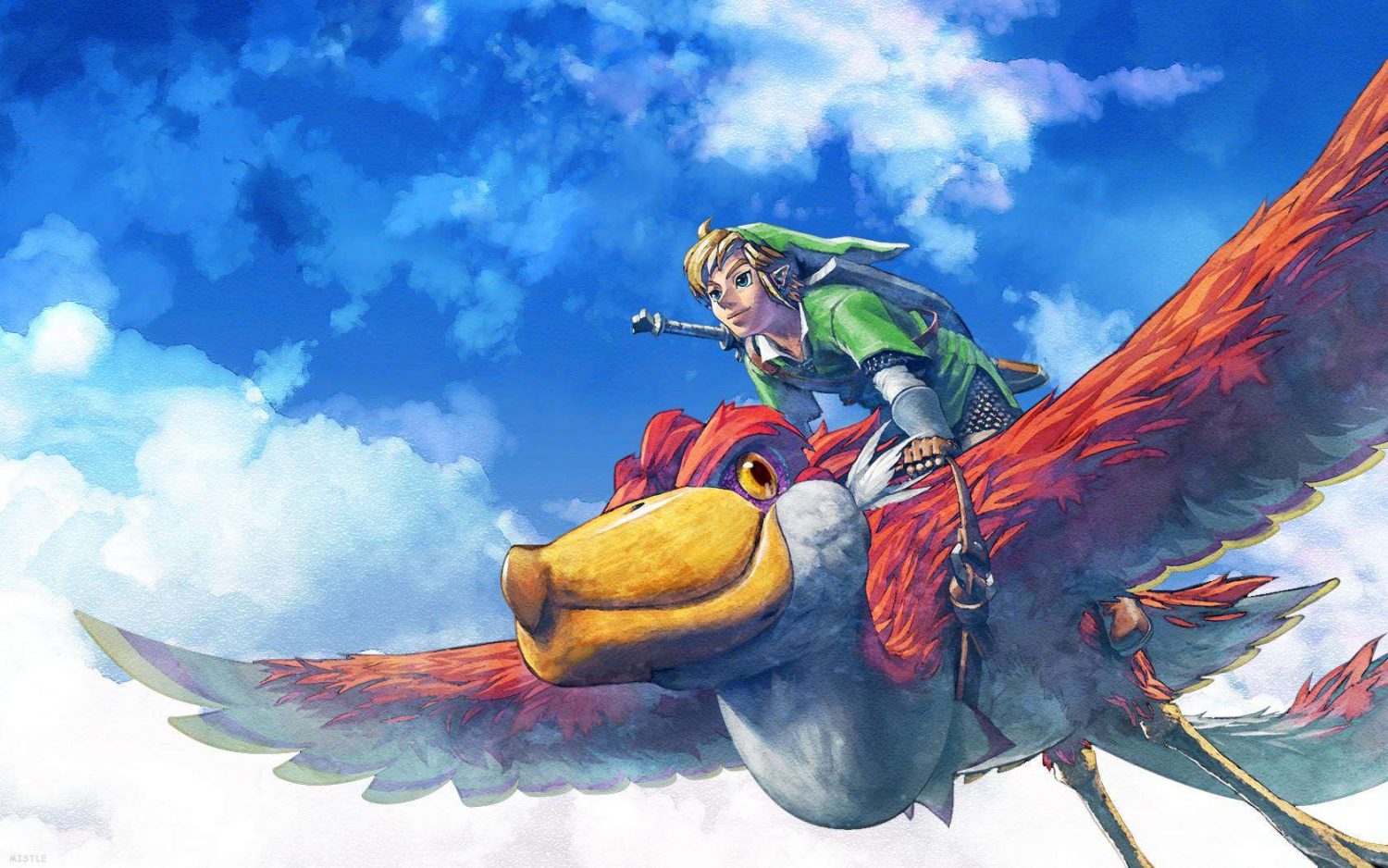 The epic adventure game with its head in the clouds.

The legend of Zelda series has been going as long as I have and, like me, it’s beginning to see some cracks in its old age. It’s back is starting to twinge, it’s waist line is ever expanding and it’s grown an unhealthy obsession with Chris de Burgh. Put another way; it’s struggling to live up to its predecessors and throwing different technology at it is not fixing anything. Lets get this straight- I am a MASSIVE Zelda fan! So I lived through the 43 hours it takes to complete this adventure and it’s taken me a while to come to a conclusion. As I was playing it I wasn’t sure if I was enjoying it or just enduring it. What I have decided saddens me to say. It is possibly the worst Zelda game I have ever played.

Taking a leaf out of both Wind Waker and Twilight Princess book in terms of a style, Skyward sword presents itself almost as if it were painted in water colours. Cute…but with the Wii’s hardware everything kind of looks like a smudge anyway. That means sometimes the game can look pretty stunning…when playing on an old CRT TV, but on my 46”  HDTV it looked pretty bloody terrible. Ailiasing problems and dodgy depth of field effects made it hard to make out things more than a foot away from Link a lot of the time! But graphics arn’t important, right? It’s the gameplay that makes a Zelda game!

You start off as “farm link” as I like to call him. It has no relevance to wether he works on a farm or not but whatever he is doing at the start of any Zelda game he looks as if that’s what he should be. You live on an airborne village called “Skyloft”- a chunk of earth that was thrown into the sky centuries ago by a goddess to protect it from the evils below until a hero of the goddess could come along and rid the world below of the evil that dwells there. Clear? No? Good. Seems in time gone by the legend has been completely forgotten by the 12 or so inhabitants of Skyloft, and now no one even thinks theres anything bellow the clouds. Gone are the expanse of fields and villages to explore on your faithful horse/train/boat- replaced with floating chunks of debree that you fly between on the back of giant a bird. It’s very close to the way that the Legend of Zelda- Wind Waker worked- only replace the fruitful sea, full of little island settlements to find and explore, with a small patch of sky and a few rocks.

The first big event is that you are about to take part in a ceremonial “race” to rise your way up the ranks of some knight academy you are supposed to be part of. Don’t dwell on that academy though- any relationship you have with it is dusted so lightly you may as well be looking for finger prints. You win of course, no spoilers there- it’s not as if you’re going to lose, but not before going on some arduous “fetch” mission to find your stolen bird. The game uses this hour long section as training for use with the sword and general controls. Excellent timing since you haven’t really got anything worth training with yet so its a marvelous waste of everybody’s time. Then after you find the bird, win and get led on a bit from Zelda (minx) its all goes tits up and the adventure begins! Zelda is taken to the world below the clouds and you have to follow her- but not before putting on a green tunic and acquiring a know-it-all sidekick, named Fi, approximately 86% more irritating than Navi. I only mention the percentage there because Fi never shuts up about them! For example – upon coming across a massive Door which clearly leads to the dungeon boss you are interrupted for a few moments by Fi who wisely proclaims “Master, I calculate there is a 96% probability what we are looking for lies behind those doors”. I can do maths like that. I calculate that if you take up my time with useless waffling like that, theres an 86% probability you’ll get a smack in the mouth.

Lets talk motion controls. There are plenty of them in this one- and to be honest some of them are quite good…if a little pointless. firstly- the big one, Links sword. It now has one to one movement (apparently, although I don’t seem to remember having some of the epileptic fits that my Link had…must have blacked out). Thanks to motion plus whichever way you move the Wii remote Links sword will follow. This little boat in technology has made them get a bit cocky with the way you fight enemies. They now have the ability to block in certain directions- making you have to think and strike them from weaker angles- or holding your sword one way tricking them to block there and then strike from the opposite direction. When it works, it’s satisfying. When it doesn’t you’ll long for the days you just had to keep pressing “B”. Miyamoto’s big wet dream comes true in the one as Link can finally raise his sword above his head…yes, I know…I’ve been waiting years for that too? So just incase you’re not looking a big enough idiot sitting alone in your living room flailing your arms about trying to hit a monster, you can just wait for the moment you need to perform a skyward strike by holding the Wii remote over your head until you have charged one. Of  course this maneuver wouldn’t be complete without shouting “I have the power!”. Its disappointing how few times you actually turn into He-man by doing this.

The shield is now also controlled by motion. To raise it and block you have to thrust the nun-chuck forwards. Again, great if it worked but most of the time it’s like smacking Mike tyson in the face. You feel you’re doing it hard enough but you still get no reaction. Also the shields are a joke as they all break very easily- forcing you to travel back to Shiteloft to buy another one. It breaks the flow of the game somewhat when you have to ask a boss to wait for a moment while you fly back to the sky to pick up another shield. Right at the end of the game you can get an unbreakable Hylian shield, for the not small task of beating 8 bosses…in a row…with no potions or fairies. Cheap bastards. Every other item either relies on you pointing the Wii remote at the screen to aim or twisting it around to control. I didn’t feel anymore involved in this that I would have by using a good old control stick to direct my items like the good old days. At least then my little flying bug might have actually ended up where I wanted him to, not spazzing out on the wall. Oh and Nintendo have no confidence in the motion plus as in the menus there is an option to re-configure it if it goes a bit haywire. By “a bit haywire” i mean link just kind of keeps his arm twitching in one place and when ever you aim you look to the nearest cloud. This happened to me a total of six times in one two hour sitting once. Imagine if cars did that? If you’d used the brakes too much on one stretch of the A6 they wouldn’t work again until you pulled over and re-configured. I’m excluding the BMW Mini of course- where this is actually a reality.

The rest of the game is hard to go into without suffering the wrath of the spoiler police. What I can say is that no one seems to be listening to me with my complains of Zelda games of late. What I mean is that if i say something is rubbish and shouldn’t be in the next game- you can bet your ass it will be in there with bells on. Case in point- I hated the repetitive nature of Phantom hourglass. The rest of the game was fine apart from those forced stealth sections in the temple that you had to return to after you completed every dungeon. Cheap tactics to string out the length of a game. Same with Twilight Princess- there was a section where you had to wander about in the dark, or twilight (HA! Puns!) Collecting a load of little pearls of light to fill a beaker to return the land to its normal state. Frustrating- and you had to do the same thing three bloody times! Well Skyward Sword takes both of those ideas and crowbars them right into the heart of the game! For a kick off there are only three main areas of the game. Three. That means you’re going to be going back to those areas quite a bit. Also they’re not really set up for exploration- each time you go to them you have a very linear task to complete. The big one though is the so called “spirit realm challenge” where you have to – sing along now – go and collect a load of drops of light to fill a vessel. FFS, and I don’t use internet abbreviations lightly, how could you put the worst part of Twilight Princess into this?! Whats that? Oh but it gets better. Not only have they added this turd of a gameplay device they have added “guardians” who get very angry if you step out of your certain sect…hang on where have I seen this before? BLOODY PHANTOM HOURGLASS! Sod off! You’re successfully ticking all the boxes on my “how to ruin a Zelda game” check list.

I’ve never felt the need to complain about a Zelda game, and I apologize for this review being more of a rant. The problem is that I see what’s happening now. The series is moving off to other shores that are to bright and scary for me now…like Brazil. Twilight princess was the final bow for the Zelda of my generation. I’ve lived and loved through the likes of Link to the past, Ocarina of time, Majora’s Mask and Links awakening and the sad fact is the Zelda series just isn’t like those games anymore. I should have seen it coming with the DS games, starting to drift a little too far from the Zelda shore for my linking, but now its certain. I feel like Link at the end of Wind Waker waving goodbye to his island. Only my island is a game franchise.

When I started this review I said that Skyward Sword was “the worse Zelda game I’ve ever played” and thats true, but that doesn’t by any means make it a bad game. It must mean something to sit though 43 hours of it and still want to complete it, even if it is for me just to say I’ve done it and see what happens at the end. There’s not many games like that anymore. So in conclusion- it’s not a bad game, but it’s not my sort of Zelda, but it seem they just don’t make them like they used to. (Opens up his 3DS and starts playing Ocarina of Time 3D)…I am looking forward to them re-releasing all the old ones for this though.

…The last boss battle is pretty epic though…