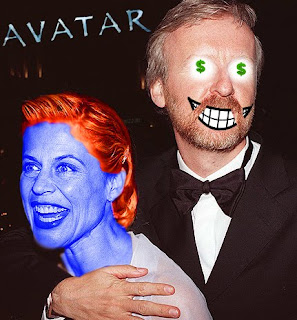 Please do ignore the picture by the way. Not having any personal piccies of the man himself, I decided to try and shimmy away from copyright infringement by ‘altering’ one that already existed. That said, I feel I may have gone the other way with it and perhaps got myself in more trouble with this one.

Right. So, Avatar then…

It was kind of…

I guess you could say it was…

It was stunning. Truly stunning. Fuck. You have no idea how much it pains me to say this because it was just the same with that fucking boat movie with the naked chick and the boy-man.
I didn’t want to see it. Brown made me see it. I didn’t want to like it. I liked it.
(Annoying, no?)

Yes. mainly because there were so many reasons why I shouldn’t have liked it.
I mean, let’s face it; t’was a tad contrived, was it not? Artificial worlds. Energy born of everything, borrowed by all, kept by none. Man as the destroyer. Hope. Truth. Pantheism. Blue people. Spirituality in its most byte-sized format so that everyone [read, dumb people] can enjoy it. Hallelujah Mountains. Countless arrays of degenerative extras shouting “Get some!” every other minute among the human marine corps masses. etc etc etc…

Yet, despite the shonky dialogue, abysmal pessimism towards our species’ own inevitable demise, incessant need to make every inch of flora and fauna ‘neon-rave’ luminous and the obligatory wheeling-out of another ‘film-score-by-numbers’ James Horner soundtrack; I actually really fucking loved it!

I mean it really grabs you. It grabs you by the sack and doesn’t let go. You’re properly on board. You’re in the command centre. You’re walking through the jungles of Pandora. You’re fighting alongside the Na’vi. You’re just there.
This isn’t even solely down to the 3D glasses, either. Its an experience, sure, but Avatar would get you there on your own, without a giant 3D cinema screen to aid you. It really is that capable a film.
The story has its many faults, but that still doesn’t matter because what you have in front of you is enough to nurse you through even the most arcane, banal dialogue. Shit; if you were deaf, this film would be the greatest thing you had ever seen in your life because your experience wouldn’t be impaired in any other way.